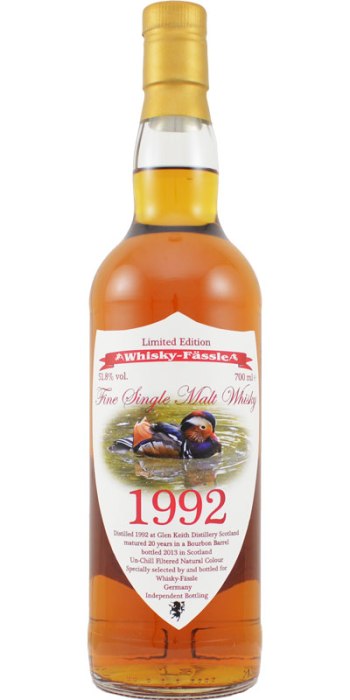 It’s either this (from WhiskyBase)

I’ve had this sample for about three years and I know I traded it with someone. I also know it’s a 1992 Glen Keith, bottled by Whisky-Fässle. However, that’s all the information there is, and I can’t figure out whether it’s the 19 or 20 year old.

The fun thing, whether this is version A or B, it’s very much a Glen Keith. I’ve tried quite a few over the years, they weren’t exactly hen’s teeth when 1992 was about 19 to 22 years ago. Every bottler had some and most of them were rather similar to this. So, a quintessential duck-labeled Glen Keith.

Tip for samplers out there: Label your samples properly. Not everything gets drunk immediately, and at some point you forget what’s what. 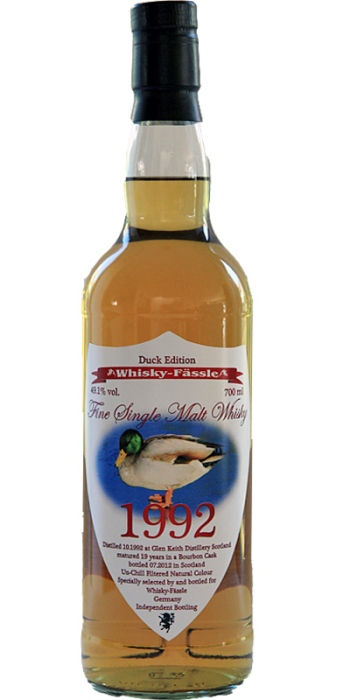 Or this (also from WhiskyBase)

Sniff:
Lots of pastry cream with the typical way Glen Keith carries American oak. Or the other way around. Lots of vanilla and creamy scents. Quite sweet with the wood itself playing second fiddle. Becomes more dry with hints of tea after a while.

Sip:
Gentle at first, but some chili heat kicks in after a few seconds. The dessert sweetness remains with brioche and pastry cream. Some dry oak and English blend tea.

Finish:
The finish goes more towards the tea and drier notes, with the dessert/vanilla/pastry cream taking a big step back. Now I get some apple and star fruit.

It’s got more depth than I expected it to have. It’s not just vanilla and bourbon cask influence. There’s a lot more to it if you give it some time and attention. Especially the addition of the fruitiness on the finish pushed it up a little bit. Apart from that, as with most of these Glen Keiths, there’s a shitload of vanilla custard, which isn’t necessarily bad, but just the median whisky nowadays. Although I do think this execution is quite loveable.

I'm very interested in booze, with a focus on whisky. I like to listen to loads of music and play lots of Magic: the Gathering, and board games too. I'm married to Anneke, have two daughters Ot and Cato, a son Moos and a cat called Kikker (which means Frog, in Dutch). I live in Krommenie, The Netherlands.
View all posts by Sjoerd de Haan-Kramer →
This entry was posted in Glen Keith and tagged 1992, Bourbon Cask, Duck Label, Glen Keith, Sample trade, Speyside, Whisky-Fässle. Bookmark the permalink.