I really was happy with all these 2000 Bowmores. It started with a slew of them around 2009 from Berry Brother’s & Rudd. Then, a few years later this one came out, and if I remember correctly there were a few more casks going around.

I bought it based on previous experiences with both Signatory Vintage and the selection from The Whisky Exchange. However, back in the day, I wasn’t overjoyed with my bottle. Keep in mind, that’s based on me looking for something else than I look for in a whisky nowadays.

Then, literally last week, I found a sample I kept of it, after not having the bottle anymore. I’m not entirely sure if I traded it, sold it in parts or just drank it with friends without giving it proper attention.

Anyway, now I did, I think. 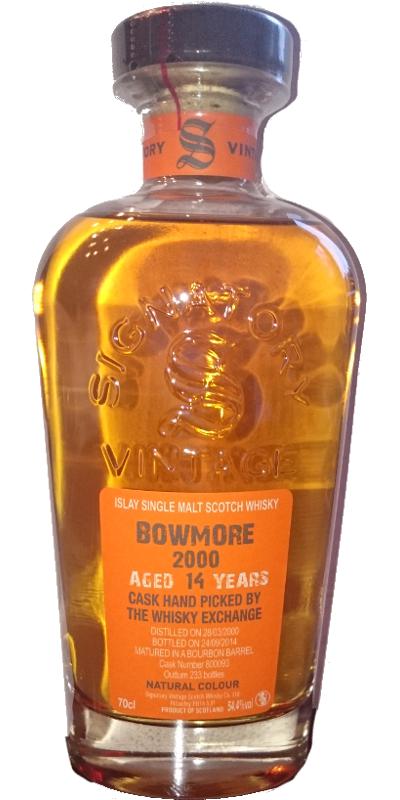 Sniff:
Very sooty at first nose, with only a little bit of the lemony crispness I know Bowmore for behind it. There’s an oily sweetness, with lemon balm, golden syrup and a bit of coffee treacle. Some straw, cookie dough and peat smoke too.

Sip:
The arrival is rather sharp with a lot of alcohol heat in it. Not much oak, but there’s a mossy, spirity flavor that’s rather nice. Crisp, with lemon, some minerals and slate. Lemon sherbet candy / Napoleon, with the heat turning into a bit of woody warmth after a while. Still quite syrupy and oily.

Swallow:
The finish mellows a bit, before some heat rises from your throat. Not very dry, but more of lemonade sweetness than before. Still there’s a bit of smoke which increases as the other flavors wane.

So, thinking back to 2014-ish, I can see why this wasn’t exactly what I was hoping for. The Bowmores that were coming out were high voltage belters, mostly, and this one is a lot more gentle than I expected.

However, giving it some TLC five years after, I do think it’s a rather nice dram. It’s not too impactful and doesn’t change anything about my perception of Bowmore, Signatory Vintage or The Whisky Exchange. It does, however, change my view of this whisky. It’s quite a bit better than I thought back then.

I'm very interested in booze, with a focus on whisky. I like to listen to loads of music and play lots of Magic: the Gathering, and board games too. I'm married to Anneke, have two daughters Ot and Cato, a son Moos and a cat called Kikker (which means Frog, in Dutch). I live in Krommenie, The Netherlands.
View all posts by Sjoerd de Haan-Kramer →
This entry was posted in Bowmore and tagged 2000, Bourbon Cask, Bowmore, Islay, Signatory, Signatory Vintage, The Whisky Exchange. Bookmark the permalink.