Ah, who doesn’t remember B101217032A? It’s one of those iconic cask numbers that makes most whisky lovers drool.

But no, it doesn’t really resonate, these eleven characters which most likely only mean something to the distillery’s barcode scanner. It also makes navigating the Kavalan Solist range pretty hard, apart from bottlings for certain outlets. “That Kavalan bottled for shop X” is far easier to remember.

Now, onwards to the whisky. I have a hard time with Kavalan. As in, most are really good, but I find that a country like Taiwan, which manufactors a lot of low end goods for Europe makes 5 year old whiskies that warrant € 100 price tags.

Also, and I know I’m a bit contrary in this, I quickly tire of Kavalan. As in, when I drink a glass of it, I really enjoy it, but when I have a second it gets a bit predictable. I’ve had this over the past couple of years with more of these bottle-shared bottles. Luckily, when bottle-sharing, you only have 10cl. 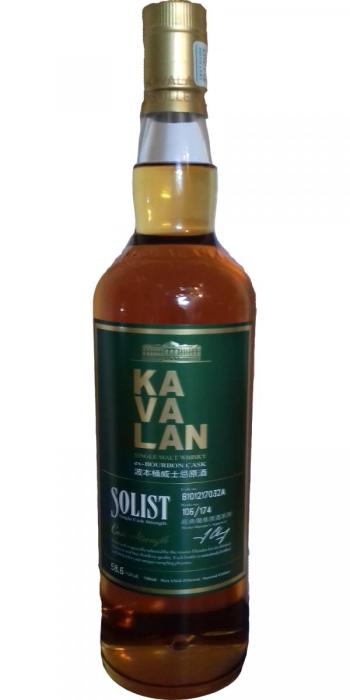 Sniff:
Very rich and fruity with lots of banana, banana candy, mango and papaya. It gets drier after a little while, but there’s also more vanilla coming through. It’s very sweet with lots of pastry like notes.

Sip:
It starts quite gentle, but builds up in intensity, strength and dryness. It’s quite sweet, fruity and pastry like with the cask leading the parade. Lots of vanilla and bourbon-cask-based-fruits like banana, papaya and the like.

Swallow:
It’s a bit sharper on the way down than I expected, even though I knew it was almost 60% ABV. The fruitiness remains as does the dryness of the palate. Lots of straw, pineapple and banana notes. Some apricot jam and freshly cut oak.

As with most of the Kavalans I’ve had over the years, I find this whisky very good, but a bit too cask driven. If you want a lot of ‘maturity’ in a few years, you need active casks, and they sure know how to pick them. I think that is why I tire quickly of them.

So, lots of cask influence, lots of fruit, lots of flavors, but there’s not much to be discovered in glass two or three.

I'm very interested in booze, with a focus on whisky. I like to listen to loads of music and play lots of Magic: the Gathering, and board games too. I'm married to Anneke, have two daughters Ot and Cato, a son Moos and a cat called Kikker (which means Frog, in Dutch). I live in Krommenie, The Netherlands.
View all posts by Sjoerd de Haan-Kramer →
This entry was posted in - World Whisky, Kavalan and tagged 2010, Bourbon Cask, Kavalan, Taiwan. Bookmark the permalink.