Just at the end of last year the final edition of the Local Barley whiskies from Springbank was released. The final one because they announced that they’d be releasing five different ones over a five year period.

This is the second 10 year old in the series of five, with the others being 16, 11 and 9. They also used different kinds of barley for the distillation process. Last year’s 9 year was from Optic barley, as is this one. The others are from Belgravia, Prisma and Bere, where the Bere is the more interesting one, with it being one of the oldest cultivated grains in existence.

What they also changed this year is that they used port casks in the mix, instead of 100% bourbon casks (the Bere one), and a mix of sherry and bourbon casks for the others. The mix of casks is something Springbank generally does for all their non-specific releases.

Anyway, so far I’ve been very enthusiastic about all the releases with the 16 year old being the best one by a fair margin. Let’s see where this one sits! 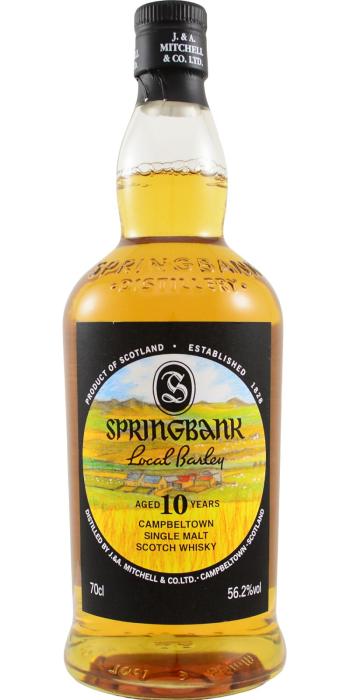 Sniff:
Funky vanilla, with pastry cream, moldy hessian bags in a dusty attic. A whiff of smoke, and kippers. Quite coastal with some minerals, apple, slate.

Sip:
Quite some oomph, with a bit more crème brûlée. So vanilla, caramel, burnt sugar. Also the typical notes of apple, smoke, kippers, apple compote, so a tad more sweet than on the nose, and slightly less funky.

Swallow:
The coastal salinity gets the upper hand here. Fairly gentle with oak, smoke, barley, salinity, a hint of tar, apples, and some vanilla.

So, this is a bit of a strange one, if I’m honest.

When all is said and done this is a really good whisky, albeit a bit overpriced at some € 130 (give or take). It has the typical Springbank funkiness which is a very good thing, otherwise it would be REALLY overpriced.

On the other hand, this is not a whisky that will stand out if you’re just drinking it. It would still be a cask strength Springbank at a decade old, but the local barley aspect would be completely lost. You need to give it attention for it to be better than ‘just a Springbank 10 at higher strength’.

In the end, that means that, yes, I find it a very solid dram. But one that needs attention.

I'm very interested in booze, with a focus on whisky. I like to listen to loads of music and play lots of Magic: the Gathering, and board games too. I'm married to Anneke, have two daughters Ot and Cato, a son Moos and a cat called Kikker (which means Frog, in Dutch). I live in Krommenie, The Netherlands.
View all posts by Sjoerd de Haan-Kramer →
This entry was posted in Springbank and tagged 2009, Campbeltown, Local Barley, Springbank. Bookmark the permalink.