There are always these whiskies that sit on the shelf waiting for the right moment because they are (supposed to be) something different. Something (supposedly) special. This one was more or less that. More or less because it’s not overly rare or hard to get, even though it was suggested to be selling like hot cakes.

Also, in the end it’s just an overpriced 9 year old whisky made from a different strain of barley that happens to grow near the distillery. Don’t get me wrong, I’ll gladly pay the price for whiskies like this since you’re buying a far more genuine product that some over engineered Macallan from a range of colors.

Anyway, this had been sitting on the shelf, waiting to be reviewed and properly tasted. I had had a few sips before and I already knew I liked it. However, when you sit down for a dram, you get to a whole different level of ‘understanding’ a whisky. In a regular session this was yet another high quality but not overly special Springbank. But, when I sat down I came up with the following notes: 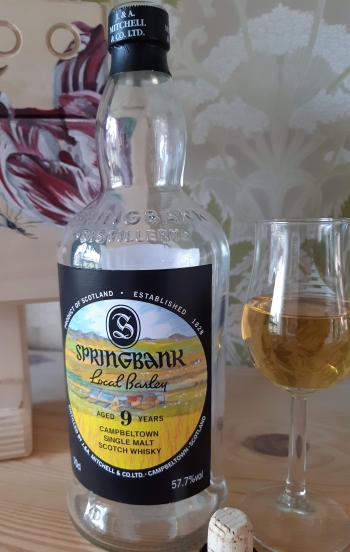 Sniff:
Properly funky like any good Springbank. Moldy attics, or a derelict house that’s not been entered in a decade. Quite prozaic for me, if I’m honest… Menthol, thyme and barley. Peat and cigaret smoke. Not a lot of oak. A bit farmyard-y, actually.

Sip:
It’s quite gentle, for a 9 year old, cask strength whisky. Although it does build up some intensity after a few seconds of ‘swimming’. Some black pepper and brine, some minerals. It’s actually a typical younger Springbank, but there’s added funkiness, added moldiness, added depth.

Swallow:
On the finish, the barley shines through, but it’s dry and old barley. Sawdust, old wallpaper (strangely, in a good way). Not overly long with hints of pepper, corky apple, some minerals and a bit of brine.

While I still find it strange to promote flavors of moldiness and funk in whiskies, it’s so good if that’s your thing. This is, contrary to the Bere barley variety from before, a fairly regular Springbank, but what makes Springbank good is all in overdrive here. And I love it.

And so, Springbank remains my favorite distillery…

I'm very interested in booze, with a focus on whisky. I like to listen to loads of music and play lots of Magic: the Gathering, and board games too. I'm married to Anneke, have two daughters Ot and Cato, a son Moos and a cat called Kikker (which means Frog, in Dutch). I live in Krommenie, The Netherlands.
View all posts by Sjoerd de Haan-Kramer →
This entry was posted in Springbank and tagged 2009, Bourbon Cask, Campbeltown, Local Barley, Sherry Cask, Springbank. Bookmark the permalink.