Last October I was staying in Speyside with my family. And even though my kids are 6, 4 and 1 years old, I found I had the moral and educational obligation to show them a whisky distillery.

The closest one was Benromach, but I visited that plays a couple of years ago, and wanted to see a new one. Especially if I’m going to see just one in a week in Scotland. Glen Moray it was. I contacted Iain Allan (who works there) to get some information on what to pay attention too, both in the distillery and in the shop…

Unfortunately Iain was on holiday at that time, but to my surprise he did leave a message to get me into the upgraded tasting. And, as a boon to Glen Moray, the supply sample bottles and a little zipper-bag to take the samples home. A good thing, since I was driving. The misses chickened out at the last minute…

The distillery tour itself was a fun one. Not spectacular, but far from uninteresting either. It was us with the kids and one other couple on holiday. They did their talk and gave us some time to sniff the different casks, which the kids hugely enjoyed. I might have missed quite a bit in doing translating for the wee ones, and trying to keep them in check.

The tasting in the shop was an interesting one, since the expanded one apart from the regular dram consisted only of things available only at the distillery. Let’s do tasting notes!

Swallow:
The finish is drier, and more woody than before. These flavors push back the sweetness a bit.

Too sweet. It’s surprisingly not-woody, but the PX gave it a strange twist. I’ve encountered this before in some sherry casks of varied distilleries. Absolutely not my cup of tea.

Sniff:
A lot of oak, but not harsh. Slightly winey, without it tasting like a finish in such casks. Dry oak shavings, hessian, rancio.

Sip:
Dry and a bit of a bite. Dry apple, old oak, dessert wine / moscatel. Lots of oak keep at it, with some berries in the mix. Pear skins.

Swallow:
The finish has a weird sweetness that is a large part blackberries, simple syrup and shoe polish. Some oak, but mostly fruity, with a hint of that moscatel.

I picked up a bottle of this when I was there, so that kind of gives away what I think of this whisky. It’s surprisingly complex for a virgin oak cask. Generally I think these are too woody, but in this case there’s a lot going on that’s interesting.

Glen Moray, Bottle your own
Sniff:
Quite apply. Even a bit mineral like after a few seconds. A bit of the typical yellow fruity sweetness from Glen Moray.

Sip:
Quite a bit sharper than expected. Dry, oaky, crisp like an apple.

Well, if memory serves this was a younger cider cask. The bottles were all sold out when I was at the distillery. Cider casks are rare and the only other one I know was an atrocious Tullamore Dew. This one is better, but it’s just not in my wheelhouse.

Strange, since I like apple-y whiskies, and ones with a hint of mineral. It’s just a little bit too weird. 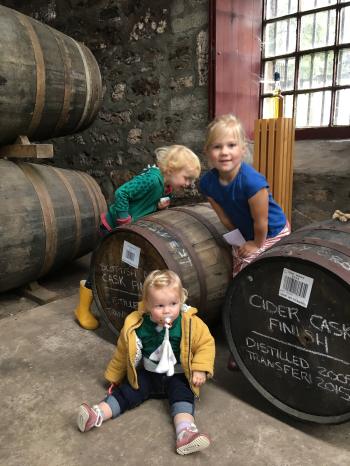 Sip:
Slightly sharp, leathery, dry and oaky. Prunes and dates, leather wax. Quite some woody smoke, and some oaky and sherry sweetness.

Swallow:
The finish is gentle and has some baking spices and trifle. Smoke, leather, some green notes behind it all.

Well, as soon as I smelled this, I knew Anneke would love this, and I loved it too. I didn’t really expect this, somehow. I generally dislike the ‘let’s get on the peated whisky bandwagon’ drams. This one is very well executed though, and the PX is spot on with enough room for the wood and spices to shine, and without too much sweetness.

A bottle was bought.

Summarizing, I kind of like Glen Moray. I do like that they experiment with casks without going all 2010-Bruichladdich on the world. I fell in love with the whisky when I was able to try a flight of 35-ish year olds from the SMWS, and have tried quite a few other ones since. Nice and fruity, not too complicated but strong enough to withstand a bit of oak.

Thanks Iain, and the team at Glen Moray!

I'm very interested in booze, with a focus on whisky. I like to listen to loads of music and play lots of Magic: the Gathering, and board games too. I'm married to Anneke, have two daughters Ot and Cato, a son Moos and a cat called Kikker (which means Frog, in Dutch). I live in Krommenie, The Netherlands.
View all posts by Sjoerd de Haan-Kramer →
This entry was posted in - Distillery, Glen Moray and tagged 1998, 2008, cider cask, Distillery Only, Distillery tour, Elgin, Glen Moray, Sherry Cask, Speyside, Virgin Oak. Bookmark the permalink.

2 Responses to Glen Moray Distillery, and their tasting kit