During 2018 and 2019 Cadenhead released quite a few of Benrinnes from the first half of the nineties. Some where in their small batch series, like this one, but there were some single casks too, as well as some bottlings through their Warehouse Tastings. I tried several of them, and all of them were very very good. And very reasonably priced too, around € 85 to € 100.

This bottling is a vatting of three bourbon hogsheads, resulting in 708 bottles at cask strength. I tried it several months ago and decided now was the time for the tasting notes. As in, I randomly picked this one from the ones already typed out. 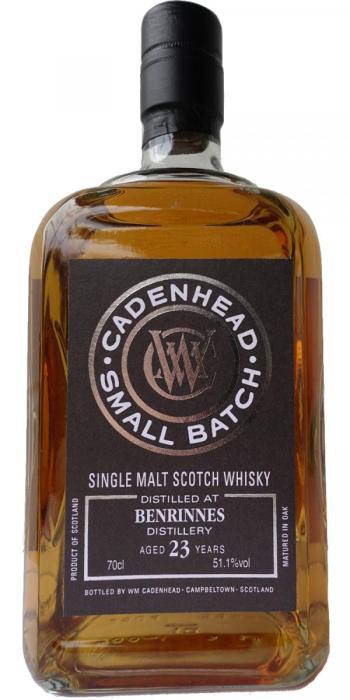 Sniff:
Lots of barley, bread and a hint of black tea. Apricot jam, biscuits. More and more fruity after a little while.

Sip:
Not particularly sharp, but not gentle either. Quite right for the ABV. A lot of fruity sweetness, barley and wood. Dark, crusty bread, again, the dryness and ever so slightly bitter edge remind me of black tea, or Earl Gray, maybe.

Swallow:
The finish is not dissimilar, but veers towards a more straight forward ‘barley and oak’ whisky. The fruit and tea is less pronounced. Quite long, though.

Somehow, this one is a boozy reflection of afternoon tea, with scones and jam. Which is something I really like, so that’s a good thing. There could have been a bit more room for the spirit to come through, which is why I score this just short of 90. That’s not to say this isn’t a great whisky, because it is. In hindsight I maybe should have bought a bottle of the one I tried in their warehouse, like JPH did…

Unfortunately, this has seen its price go up to € 180, and that’s too much.

I'm very interested in booze, with a focus on whisky. I like to listen to loads of music and play lots of Magic: the Gathering, and board games too. I'm married to Anneke, have two daughters Ot and Cato, a son Moos and a cat called Kikker (which means Frog, in Dutch). I live in Krommenie, The Netherlands.
View all posts by Sjoerd de Haan-Kramer →
This entry was posted in Benrinnes and tagged 1995, Benrinnes, Bourbon Cask, Cadenhead, Speyside. Bookmark the permalink.