Several years ago I bought this bottle after tasting it and mistaking it for a single malt. I’d like to say I’ve come a long way since then, but I guess that’s just wishful thinking. In this case I feel less like an idiot since this is a rather ‘malty’ blend. By that I mean there’s, I think, quite a lot of malt whisky in this blend, compared to its well known siblings from the blends stable.

Campbeltown Loch is a blended whisky produced by J&A Mitchell so it’s safe to say/guess there’s a lot of the Springbank malts in here. Apart from that, little is known and no information is given. The back label just has a barcode, some mandatory icons and the logo that’s also on the front. No info whatsoever.

Apart from that, when this came out it was a steal. I bought it in The Netherlands at a slightly inflated price of some € 75, while it would have been available from closer to € 60 online, by the looks of it. Even then, a 30 year old blend at any of those prices is a steal.

I just checked Whiskybase for current availability, and you still can get this, but its popularity hasn’t gone unnoticed. Only Whisky-Online.com has it, at £ 175 a pop. What I just realized is that in the current market, 175 quid for a 30 year old blended whisky isn’t even that bad a deal, right? 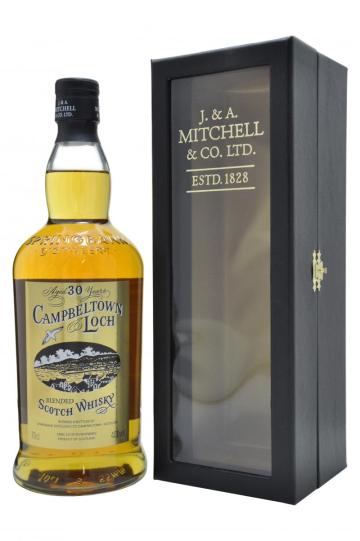 Sniff:
Very malty and not too heavy at all. There’s quite a lot of salty scents present, hence my guess for Springbank. There’s sugar and vanilla, and some apple and pear. Not too complex but superb balance and smoothness.

Sip:
Gentle and mature with vanilla, ripe pear and salt. Slightly drying and light, with the tiniest hint of pepper. There’s a tiny layer of smoke behind all this with oak and cinnamon. Quite a lot of oak, but not too heavy.

Swallow:
The finish is very similar to the palate but not overly long. Rich and smooth.

By the tasting notes you can get the idea that this is not an overly complex and layered whisky. That is true. It’s rather straight forward but the three decades in oak worked very well for all parts and make for a great sipping whisky. Highly recommended, but a little expensive at £ 175.

I'm very interested in booze, with a focus on whisky. I like to listen to loads of music and play lots of Magic: the Gathering, and board games too. I'm married to Anneke, have two daughters Ot and Cato, a son Moos and a cat called Kikker (which means Frog, in Dutch). I live in Krommenie, The Netherlands.
View all posts by Sjoerd de Haan-Kramer →
This entry was posted in - Blended Whisky, Campbeltown Loch and tagged Blended Whisky, Campbeltown, Campbeltown Loch, Springbank. J&A Mitchell. Bookmark the permalink.