Right on the heels of a far longer tasting at Balvenie than we expected we had to go back north to Benromach. It was an hours drive, and we had an hour. And we still needed to grab lunch. 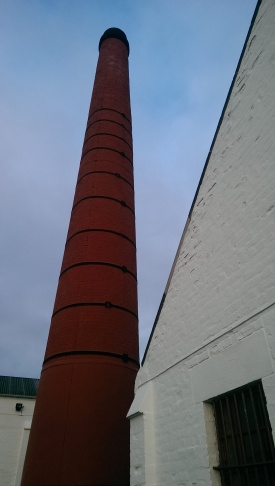 Right at the first petrol station we grabbed rolls, ham, cheese and a lot of other crap to stuff ourselves before a full afternoon of whisky, and distillery information.

At Benromach we booked the tour with Keith Cruickshank. That’s the same tour as the the second most elaborate with the difference that you get a bottle of the bottle-your-own whisky, and the distillery manager is the tour guide.

We expected we’d buy the Distillery Only anyway, so an extra fiver for improving the tour to be with a guy who knows every nook and cranny of the place sounded like a good idea.

We were led to a small room with a big screen and a projector, but (luckily) we didn’t have to watch a video about anything. I find videos during tours of places quite a downer, most of the time. Anyway, most of the tour consisted of Keith explaining about whisky making, which is something I don’t have to write down here.

The interesting bits, then.

Benromach has a lot of room to expand since they’re not even using half the distillery buildings at the moment. The old distillery used to be a lot bigger, but that’s also when they still had malting floors and such.

They only have two stills of which one has just been replaced and had a very different color to the other one. Replacing stills means that the roof has to be taken off the distillery. Contrary to most more modern distilleries (Caol Ila, Clynelish and some others) back in the day they didn’t really take replacing still into account when setting up the building.

At the room with the spirit receiver and the filling station there’s a lot of names on the wall, from the guys who were working at Benromach when it closed in 1983. It’s nice that they preserved that, as a reminder to try their hardest to never let that happen again. 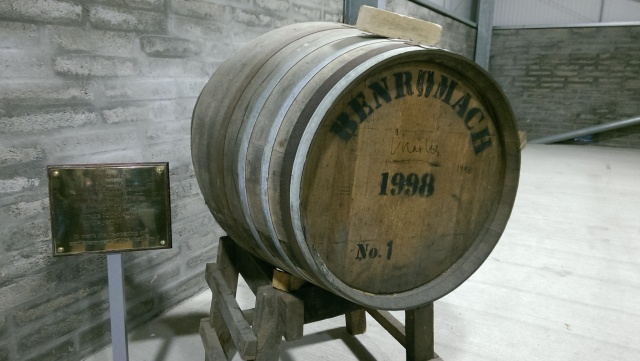 Around the distillery they have a lot of warehouses, most of which are very new. One being completed only last year (if I remember correctly). It’s nowhere near full and well insulated. They got the first cask from 1998 on display as well as casks from every year they’ve been open since.

I’m not sure why but they’ve torn down most of the warehouses that were on the premises in favor of new ones. I take it they weren’t structurally sound anymore. Some of them were already torn down when Gordon & MacPhail took over in 1993. 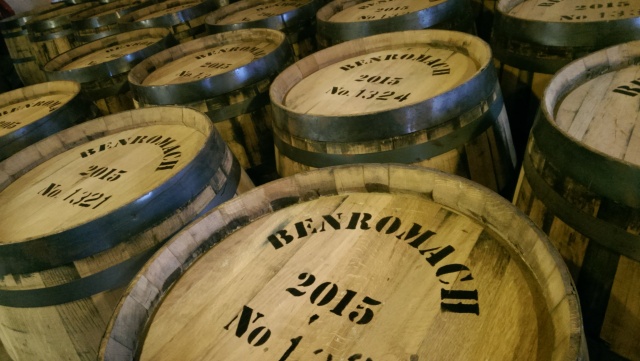 What I also found interesting is that, contrary to the marketing exploits of the last couple of years, Keith never mentioned the ‘quality of everything’ in which they do. The wood, the slow distillation, the barley. In Benromach’s marketing they focus heavily on that to explain their quality drink.

What he did focus on was interesting though. Since Benromach focuses on a fifties and sixties style of Speyside single malt they had to figure out how that tasted. Obviously, not much of what is around is from that era, since most of that hooch has been drunk by now. Also, what is around from the 1950s and 1960s is 50 to 70 years old by now and you can’t really decide how a ten year old should taste, based on that.

That too is where Gordon & MacPhail comes into play. Seemingly, they have stocks of bottles from that period so they could analyze how whisky from bygone times used to taste and direct the distillery in such a way that it will taste similar.

Personally, I think they’re doing a great job. Whether or not it’s similar (I think it is of an old fashioned style, based on my limited experience) it sure tastes good, and quite different than current Speyside whiskies.

It really stood out that Gordon & MacPhail don’t seem to be rushing the distillery into pumping out sellable whisky every second. They work in fairly regular shifts and are not producing at capacity for the distillery. A healthy growth seems the target and I think that’s clever.

After the tour we had a tasting in the old distillery manager’s cottage. They only recently bought that back from the previous occupants.

The 1st fill bourbon cask was really sharp on the nose. Not overly surprising at around 62.5% ABV. Green and leafy with tree bark and a gentle trace of smoke too. The palate was very sharp, dry and alcoholic. Yellow fruits like pear and quite some flavor of new spirit left. The sharp finish added white pepper.

The 1st fill sherry cask very fruity on the nose with lots of plums and peach. It had a slight spiciness and some pastry flavors. The palate really showed the sherry flavors with rich peach and date. Quite sharp, but not like the bourbon cask. The finish really showed this was Oloroso matured.

The vatting then. It’s quite like the 100 proof. That means full, rich and fruity with more smoke than you’d expect from a Speysider. Pear and peach with a slightly fatty texture. Really nice, this.

Benromach 30 year old was the first one from before the takeover by Gordon & MacPhail. The bottling has been available for a while now, since 30 years ago the distillery wasn’t even operating.

On the nose this one was very different than the rest, obviously it had a lot more age to it. It’s a very fruity drink with gentle sherry notes on the nose. Confit peach and less smoke than more modern bottlings. The palate was surprisingly rich (surprising since it was a 43% dram after a lot of cask strength violence) with black pepper, fruit and a lot of oak. The finish was lovely and ‘old’ with lots of oak and a slight acidity.

The bottle your own stuff was quite nice and had a very spacious set up since they use one of the old buildings for it. It was a bourbon cask at nine years old, not unlike the one we tried in the tasting.

I’ve got one of the Bottle-your-own bottles is up for sale here. One of my friends didn’t want to buy any booze so I bought his bottle as well.

I'm very interested in booze, with a focus on whisky. I like to listen to loads of music and play lots of Magic: the Gathering, and board games too. I'm married to Anneke, have two daughters Ot and Cato, a son Moos and a cat called Kikker (which means Frog, in Dutch). I live in Krommenie, The Netherlands.
View all posts by Sjoerd de Haan-Kramer →
This entry was posted in - Distillery, Benromach and tagged 1976, Benromach, Cask Sample, Cask Strength, Distillery tour, Forres, Gordon & MacPhail, Keith Cruickshank, Speyside, Tasting, Travel. Bookmark the permalink.