Last Friday was the day I booked a tasting at my favorite whisky shop. We went to Den Bosch, to De Whiskykoning (who has a new web site, by the way) with some friends for the bad ass whisky tasting.

We agreed upon an amount per person and he would make a line up of great drams and not tell us what the drams were until we had tasted them. A proper blind tasting, so to say.

At eight o’clock all nine of us were in and we were guided to the tasting room, which is always an impressive sight. Hundred of bottles line the walls, from recently released to decades old stuff. 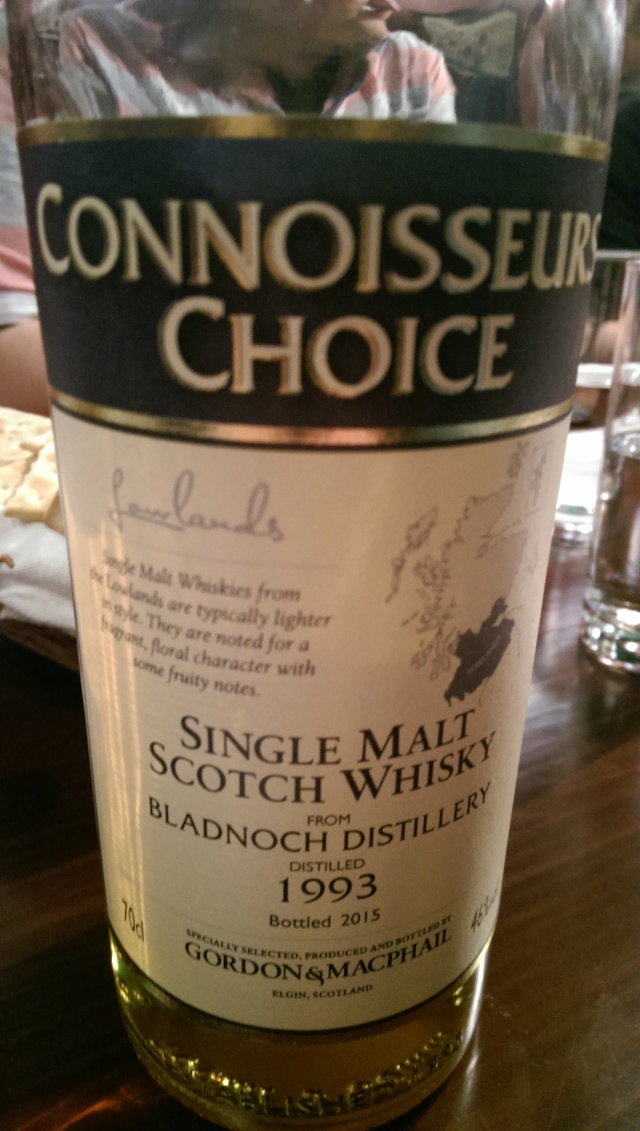 The first whisky was this Bladnoch. My father in law even called the distillery!

The nose is light and floral, with a definite creamy scent to it. Smooth with some oak and soft grain aromas. The palate was surprisingly sharp with notes of barley, cream, grass and flowers. Quite dry too. The finish was smooth with that creaminess again, and some light spices.

Then another Lowlander! This 1989 Rosebank from a sherry cask is a really good whisky that shows why Rosebank is such a fan favorite.

The nose had a hint of glue at first with a light hint of sherry. There’s raisins and peaches. A light dusting of spices, some aniseed and orange. The palate is very dry with a combination of fruits and spices. Dry sherry, peach, date. Quite smooth again. The finish long and highland like. Someone even called if Brora-y. Ever so slightly ashy with oak and wood spices.

Amazing whisky that could stand up to quite a lot of the cask strength stuff that came after. Ridiculously tasty!

A blended malt by David Stirk’s Creative Whisky Company, from the David Rampling Series from last year. It contains two unnamed single malts and is bottled at 45.4%, at 38 years old.

This one fully went for the Sticky Toffee Pudding nose, palate and finish. On the nose there also were dates, oak and some aniseed. The palate is dry and oaky, but still crisp. Dates and dryness too. The long finish added some almond to the mix. 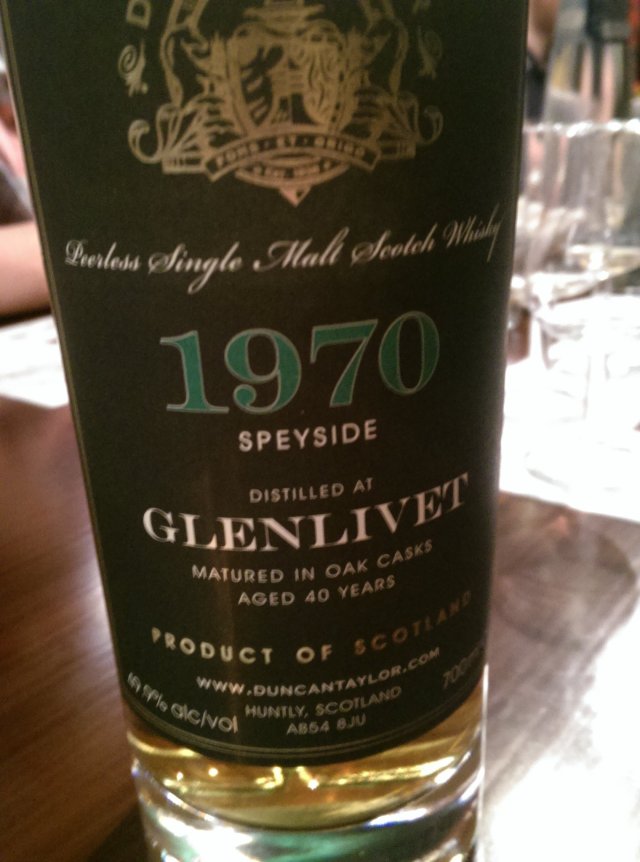 A very old Glenlivet from Duncan Taylor’s Peerless collection. At 40 years old, this one was a beauty.

On the nose it is very smooth and has lots of barley and straw, and oak shavings. A touch of vanilla too. The palate is smooth with lots of oak, old oak and a slight increase in ABV over the rest, which was noticeable. The rich finish focuses on oak and oak shavings.

I finally got to try this but I expect to write proper tasting notes soon, so I’m leaving it at that. 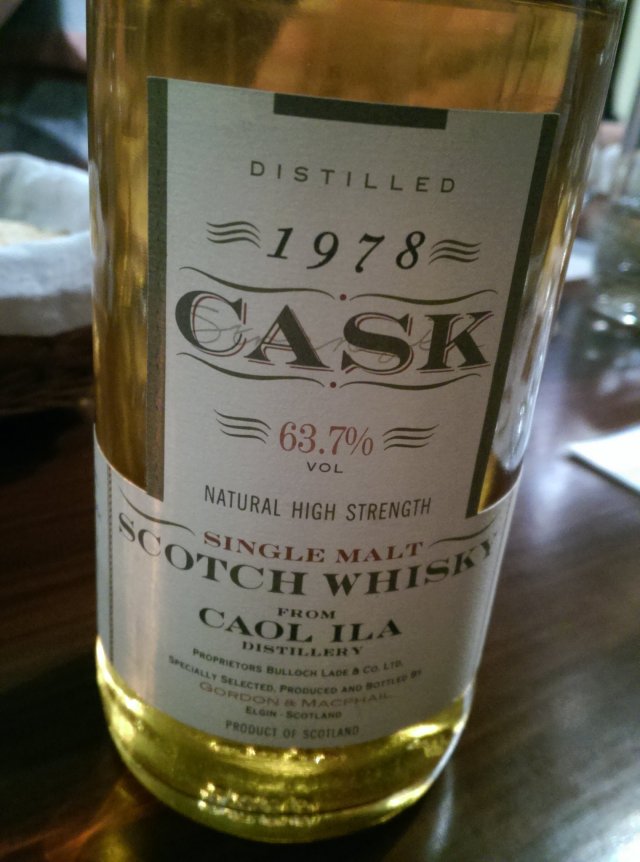 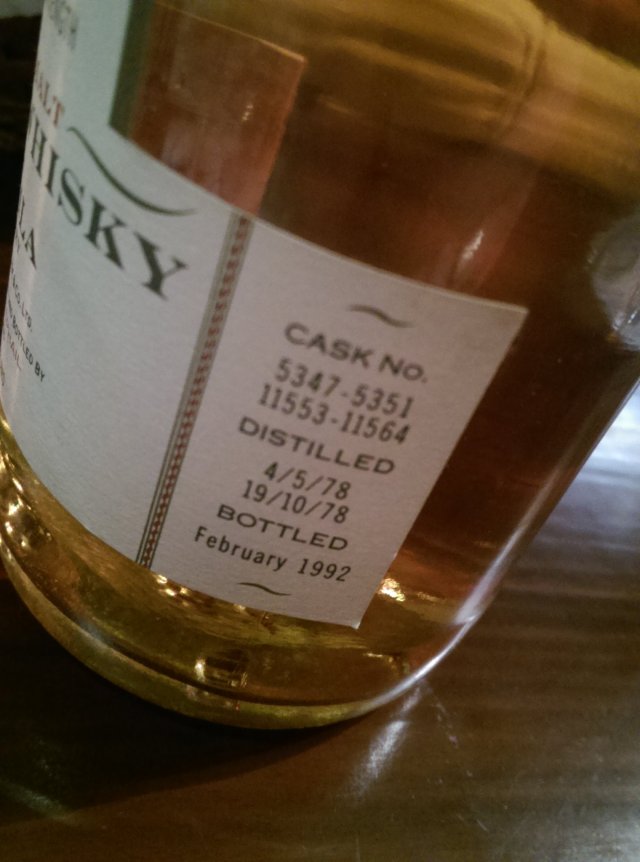 Then this came along. This is a bruiser. Not a single cask, but still a very limited release, especially after being in the bottle for 24 years.

The nose had a tiny hint of rubber, but more in a way that it is a prelude to something great, than just car tires. Some sherry and iodine, very dirty with ‘ontbijtkoek’, oak, figs, plums. Very old sherry. The palate is sharp and rich with a light dryness. Very sharp indeed (it turned out to be almost 64%), but also sherry and dried leather. The finish suddenly had some beef stock, with leather and that hint of rubber again. And dried figs and plums.

Over the entire bit there was a whiff of smoke but not a lot indeed. We did call it old Caol Ila but weren’t very sure of ourselves. But damn this is insane whisky. A shame the shop owner didn’t want to sell the rest of the bottle, at whatever the cost.

Then this one popped up as an encore. I didn’t write proper notes on it and I still expect to buy it at some point. Somehow I forgot after the tasting. Maybe I was slightly more impressed with the rest?

So, a ridiculously awesome tasting. Very much worth the € 50 we spent on it and I am already making plans for next year.

Thanks to Rob who owns the shop, but also Michiel, Seth, Bram, Henk, JP, Ronald, Elco and Thomas!