In April of last year I went to Islay with three of my best friends for a rather epic week of booze, scenery, Scotland and a few games of Cards Against Humanity. We decided to not do too many distillery visits, since we also wanted to see the island itself, which was a good decision (read more here, here and here).

Of course, way more was spent on whisky ‘for bottle sharing’ than anticipated, but this one was a no-brainer as soon as we tried it. The then Distillery Only bottling at Bunnahabhain was one that I didn’t expect much of (weird cask, peated to where I prefer their unpeated whisky), but a sip of it during the Warehouse 9 Tasting made me change my mind. Of course, there’s the risk of it being significantly less impressive out of its natural habitat, but here we are. 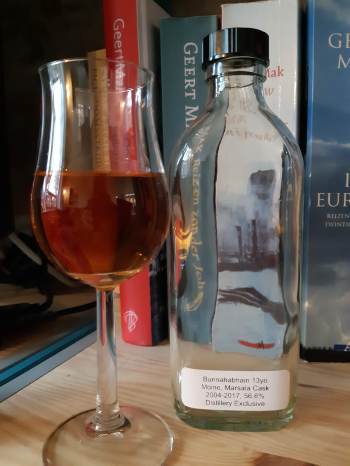 Sniff:
Far lighter than you’d expect from a peated Bunna, Marsala and the ABV. The smoke is slightly menthol like. Some leather and a bit of dried fruit. Mango, peach, figs and honey, a bit more gentle than ‘normal’ sherry casks (so, no dates, plums). Fatty/creamy milk chocolate.

Sip:
Still not ‘unsharp’, but more in the range of a 48/50% drink, compared to the 56.6%. Thick, juicy and fruity with hints of leather, and baked fruits. Peaches, mango. The smoke is quite present, but not overpowering. A crisp hint of menthol and thyme. Dry oak and old dunnage warehouses.

Swallow:
The finish focuses more on the oak and the smoke than before. The fruit is still there, but slightly dialed back. A bit funky with old moldy warehouses and old casks. Rather long and warming.

Truly like being back at the distillery during the very epic tasting, on a Monday morning. We had an awesome tasting then, which colors your judgment. But in this case the enthusiasm is still alive and kicking nine months later. An absolutely gorgeous and fruit dram that really embodies what Bunnahabhain makes me think of.

It’s rather thick and syrupy, which works well in this case, with the light dried fruits and leather. A very old fashioned Bunnahabhain, and I love it.

The only drawback of this whisky is that I decided to split it with my friends, and therefore only had a (sizeable) sample. Silly me.

Of course, it’s now available through the secondary market for a lot more…

I'm very interested in booze, with a focus on whisky. I like to listen to loads of music and play lots of Magic: the Gathering, and board games too. I'm married to Anneke, have two daughters Ot and Cato, a son Moos and a cat called Kikker (which means Frog, in Dutch). I live in Krommenie, The Netherlands.
View all posts by Sjoerd de Haan-Kramer →
This entry was posted in - Distillery, Bunnahabhain and tagged 2004, Bunnahabhain, Distillery Only, Distillery tour, Islay, Marsala cask, Scotland 2018. Bookmark the permalink.