On April 9th of last year I blogged about a tasting I went to in which we tasted 6 whiskies, mounting up to a little over a grand of booze. The idea by the organization/hosts was to have one last hurray for a great bottle from their shop before it ran out. You can sell it, but you can also put it in a tasting for the same amount. A good idea if you ask me.

On December 1st they hosted the second tasting like this and this time I went with my father in law. We both enjoy a good dram so it seemed like a good idea. It turned out to be one too. 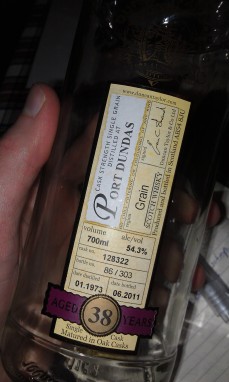 Port Dundas 38, 54.3, 1973-2011 – Duncan Taylor
Like last year, the first dram was a grain whisky. This is a weird one with scents of ethanol, sherry, glue and a certain lightness. The palate was very astringent, lots of sharp wood flavours, nuts and anise. There wasn’t a lot happening and I expected more from such an oldie. The finish had some salmiak. Not my style of dram.

Teaninich 1973, 41.8%, btld 2010 – Berry Brothers & Rudd
This was more my style and held the middle between bourbon and sherry cask. The bottle doesn’t state which kind, but I think it’s a refill cask at least. Floral and aromatic on the nose, with gentle tropical fruit. The palate was slightly drying with some pepper, wine gums and pear drops. A little thin maybe. On the finish I found loads of fruit, tropical and oranges. Fresh cut flowers too. A real step up from the Port Dundas.

Macduff 1973, 46.9%, 38 years old – Exclusive Malts by David Stirk
Sweet candy, simple syrup, walnuts, spices and pine apple on the nose. Almost no wood. The palate had tropical fruit juice, syrup, wood and a big richness. Almonds and some bitter woodiness too. The finish was fruit, fruit, fruit. Friggin’ delicious! This will be hard to top!

Bunnahabhain 35, 56.6% – Adelphi
Light scents, but with massive heaps of sherry to back them up. Slightly spicy, cake, cinnamon, a hint of glue in a good way. The alcohol is rather present. The palate had the sherry to the background and the whisky more prominent. My concerns of it being over-sherried were unfounded. Sharp, salty with barley, wood and allspice. The finish has sandalwood, raisins with some bitter wood. It’s delicious in a way, but I found it rather ‘in your face’. I prefer it a bit more nuanced.

Laphroaig 22, 1988, 49.6% – Exclusive Malts by David Stirk
The only peated whisky of the bunch (Joeri, who runs the shop, doesn’t like peated whiskies. His partner in crime Peter does). Salty with slightly medicinal peat on the nose. Smoked mackerel. The palate was friendly, but sharp (how is that possible?). Fruity smoke, with pepper, peat, salt, smoke and wood. The finish is very playful. Sharp but not overly so. Smoke, sweet fruit and something fishy. It lasts forever.

It’s hard to pick a favourite in the bunch, but I think it’s a tie between the Laphroaig and Macduff. The Inchgower was great too and the runner up. This was, in every way possible, a kick-ass tasting. Good company, some nice bites in between and stunning whiskies! I hope they do such a tasting again soon. It’s worth every euro!

The tasting was hosted by the Glen Drammor whisky shop in Purmerend.

I'm very interested in booze, with a focus on whisky. I like to listen to loads of music and play lots of Magic: the Gathering, and board games too. I'm married to Anneke, have two daughters Ot and Cato, a son Moos and a cat called Kikker (which means Frog, in Dutch). I live in Krommenie, The Netherlands.
View all posts by Sjoerd de Haan-Kramer →
This entry was posted in - Grain Whisky, Bunnahabhain, Inchgower, Laphroaig, Macduff, Port Dundas, Teaninich and tagged Adelphi, Berry Brothers and Rudd, Bunnahabhain, Creative Whisky Company, David Stirk, Duncan Taylor, Glen Drammor, Grain, Highlands, Inchgower, Islay, Laphroaig, Macduff, Port Dundas, Speyside, Teaninich. Bookmark the permalink.