Back from the family holiday

So, I’ve been MIA for about three weeks now. No longer. After a long weekend in the Ardennes of Belgium I came back home to get my car fixed (the AC broke) and went straight back south to Burgundy.

It was time for our family holiday, while it still was possible. The misses being 33 weeks pregnant and all. We went on a little camping trip in the vicinity of Autun. Little did I know that there is an area in Burdundy where there is no wine industry…

On our weekend in the Ardennes with 8 others, an annual weekend we have with friends, I usually take some whisky with me and this year I brought some left over samples from a couple of Twitter Tastings, and other stuff that I had sitting on a shelf, reviewed but not finished. I think we went through some 100 samples while playing Cards Against Humanity, barbecueing and other stuff.

Right after the weekend, except for the AC fix we needed, we went camping in France. The misses, our little girl and I. During that trip we mostly sat on our asses watching the little one tiring herself in the playground on the campground. I did take some whisky with me to finish but I did drink less than I expected. Of course, since we were in the middle of shit, I didn’t blog a letter. Hence my absence.

I tried the Wild Turkey 81. I love the 101 and expected less of this. It’s lovely however, fierce and spicy even though it’s quite a bit lower in ABV. Unfortunately, I didn’t get around picking up some for myself, which is a shame since they were only 16 bucks a pop in the supermarket.

I almost had an empty bottle of Knob Creek Single Barrel explode in my hand. Apparently, when there is a drop left and you leave in the sun for a couple of hours the alcohol evaporates and the pressure build inside the bottle. When I took of the cork (I always keep the cork) it shot off, there was a fume coming out of the bottle and the glass was about 60 degrees Celcius. Weird stuff. 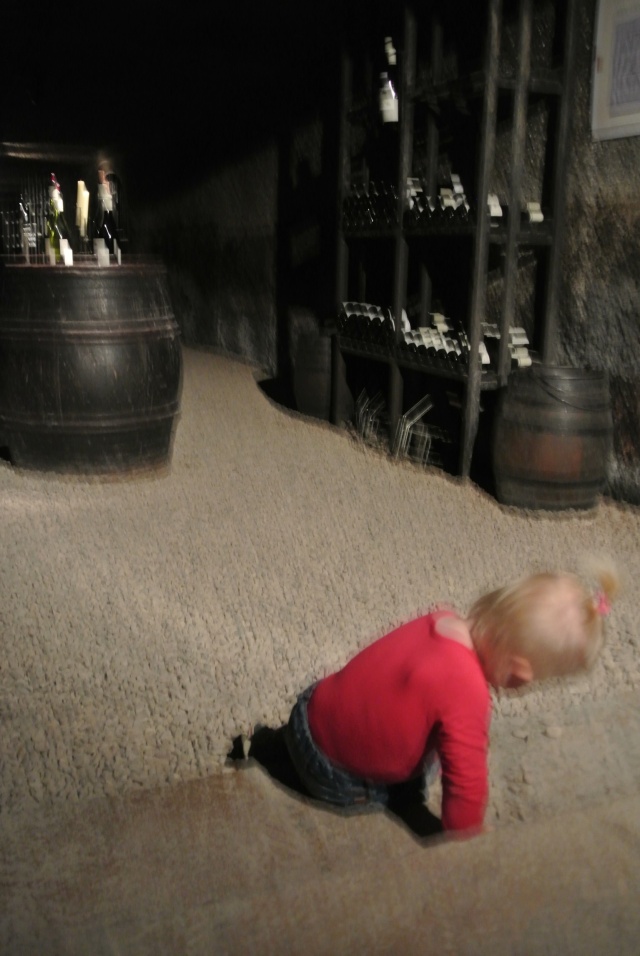 On the first day in France I visited Michel Couvreur Whisky in Bouze-les-Beaune. There will be a story on this on the blog but that will be in October or so. I am first putting it in the Usquebaugh Society’s club magazine. In short, it was rather cool. I tasted some of their releases, saw the cellars, had some cask samples and a 39 year old Manzanilla Sherry.

We bought a case of Cremant de Bourgogne. Technically it’s the same as Champagne, but since it’s from the wrong area they can’t call it that. Apart from that it’s the exact same, but a LOT cheaper. Champagne should be cheap too, but someone has to pay for the ridiculous amount of marketing and promotion spent on the high end brands.

The Marche de Vins in Beaune is a pretty nice place for a tasting. You can go in and for 11 bucks you can taste 7 sips of different high end wines. For a bit more you can taste more. For a bit more still you can taste some Grand Cru versions of typical Burgundian whites and reds. With a one year old tagging along, you stick to the shorter tasting though. Still pretty good and we picked up some nice bottles for when Anneke is no longer pregnant.

I read some books on booze and one of them was about Absinthe. It revamped my interest in that and pastis, so I’m going to try to get my hands on some proper drippers to do some reviews of that. I still have some Absinthe samples sitting around, and now some pastis as well. Interesting stuff, Ralphy would say.

I'm very interested in booze, with a focus on whisky. I like to listen to loads of music and play lots of Magic: the Gathering, and board games too. I'm married to Anneke, have two daughters Ot and Cato, a son Moos and a cat called Kikker (which means Frog, in Dutch). I live in Krommenie, The Netherlands.
View all posts by Sjoerd de Haan-Kramer →
This entry was posted in - News and Announcements, Bowmore, Knob Creek, Michel Couvreur and tagged Bourbon, Bowmore, Burgundy, Cremant de Bourgogne, France, Islay, Kentucky, Knob Creek, Michel Couvreur, USA, Whiskey, Whisky, Wine. Bookmark the permalink.

1 Response to Back from the family holiday