Another day, another dram. This one sat darkly in its bottle, so I went in with a slight prejudice towards its flavors and cask type. It didn’t really cost me in the end, since I’m spreading my guesses without actually going for a specific whisky, most of the time. 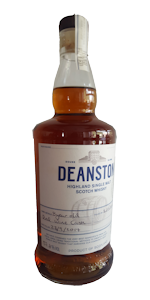 An enormous focus on European oak from the start. Thick and fruity with figs and dates. I think I’m getting some tea leaves, as well as golden syrup. It’s very, very dirty in its style later on. In a way of bog water, meets liquified fruit cake, meets tar.

Sip:
The palate is sharp and dry with lots of, what I thought was, dry sherry. Spices, golden syrup and caramel. It’s rich with old fruit and dried fruit. Figs and dates again with a slight bitterness.

Right. What the hell did I drink yesterday evening? This is not a good whisky, let’s get that out of the way. I figured it was a sherry cask instead of a bordeaux cask, because it’s not a typical wine cask fruitiness I think. Also, the dried fruits and spices are something I generally associate with a sherry cask.

Apart from that, it’s just gross. Like the cask was rotten with all kinds of mold inside. From fellow club members I heard references to bogwater, corpses and muddy ditches. I can see where they’re coming from.

Luckily I guessed 9 years old, 50% (way to low) and Glencadam (they have those off the beaten path casks at young ages). Luckily that’s a Highland distillery too. Although I limited my search to that region, since I figured it to be a Highlander. A bad one.

Go figure that one guy in the club rated this at 93. And he’s not someone to be overly generous with his points. How polarizing a dram can be…

I'm very interested in booze, with a focus on whisky. I like to listen to loads of music and play lots of Magic: the Gathering, and board games too. I'm married to Anneke, have two daughters Ot and Cato, a son Moos and a cat called Kikker (which means Frog, in Dutch). I live in Krommenie, The Netherlands.
View all posts by Sjoerd de Haan-Kramer →
This entry was posted in Deanston and tagged Blind Tasting Competition, Deanston, Distillery Only, Highlands, Usquebaugh Society, Wine cask. Bookmark the permalink.