Last Friday I was at a whisky tasting at De Whiskykoning. In that line-up were the previous two Inchmurrins from The Whisky Nerds, and they were hugely popular. And while Rob tried to keep the arrival of the third one under wraps, I saw one of the Whisky Nerds (Bram) driving off after delivering a couple of boxes to the shop.

To indicate how ridiculously popular the three bottles were:

I saw practically everyone going home after the tasting with at least one of the Whisky Nerds bottlings. Some people bought all three, some bought the first two, and some bought any other combination of 1 or 2 bottles. I’ve been to a lot of whisky tastings over the years, but never have I seen such focus in purchases after it.

The theme for the Inchmurrins is ‘Trias Usquebaugh’, named after the trias politica on which most western governments are built. After Law and Order, the third one is named Executive. Contrary to people’s expectations of it being named ‘Special Victims Unit’. 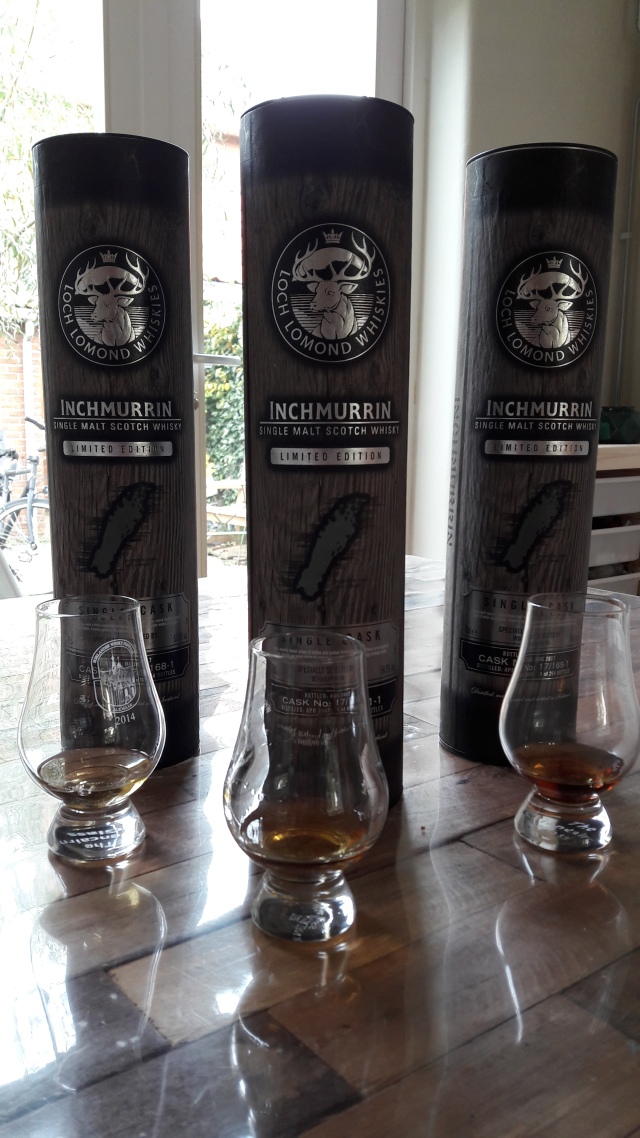 Sniff:
It’s a little bit sharper on the arrival than I expected, but it’s still a cask strength dram so not too surprising. There’s a lot of sherry in this bottling, with the bourbon being noticeable, but playing second fiddle. So, a lot of the dry sherry notes, but they’re supported by the yellow fruit notes from the bourbon cask. Slightly dusty with leather, old wood, and dried peaches and plums.

Sip:
The palate is sharp on the arrival, it can use a drop of water to slightly mellow it. It’s dry and peppery too, with the pepper being the red chili kind. Lots of dried fruits here, dates, peaches, plums. Some wet wood like in dunnage warehouses. Some syrupy orange notes later on.

Swallow:
The finish mellows quickly but stays rather rich. Slightly dry with lots of fruit, lots of flavors with some tropical fruits coming through here. Mango, pineapple.

Bourbon, the mix, Sherry. A gradient of Inchmurrins.

While I was familiar with the concept of this whisky (keep something back from the Law and Order bottlings, and marry that for a couple of months before bottling that too), I was very curious to find out how this turned out.

And as it turns out, this does nicely hold some middle ground between the previous two Inchmurrins. There was more of the sherry cask involved in getting this ‘blend’ together, and that’s noticeable. The bourbon cask plays second fiddle, but has a very important role nonetheless.

Still, if you can still find them (maybe you can hire, the A-Team), I think you should get all three of them. Share them with a couple of friends and see where your preference lies. With ten people tasting them last Friday and not a single one disliking them, I think you’re good to go!

Thanks to The Whisky Nerds for supplying a sample!

I'm very interested in booze, with a focus on whisky. I like to listen to loads of music and play lots of Magic: the Gathering, and board games too. I'm married to Anneke, have two daughters Ot and Cato, a son Moos and a cat called Kikker (which means Frog, in Dutch). I live in Krommenie, The Netherlands.
View all posts by Sjoerd de Haan-Kramer →
This entry was posted in Inchmurrin, Loch Lomond and tagged 2003, Bourbon Cask, Cask Strength, Free Sample, Highlands, Inchmurrin, Loch Lomond, Sherry Cask, WhiskyNerds. Bookmark the permalink.