A flock of Inchmurrin

After some posts of Islay whiskies, we’re moving a little bit east to Loch Lomond. This truly stunning are is home to a large but largely unknown distillery of the same name. Most of it’s fame (if you can call it that) comes from Captain Haddock, and cheap blended whiskies.

Luckily, they’ve been making massive headway with revamping their bottles a while ago and getting some really good whisky on the shelves.

Last year I did a minor bottle share of their new 12 year old and a Signatory bottling of a 22 year old single cask. Then recently I got some samples of upcoming bottlings by The Whisky Nerds. Time for reviews, don’t you think? 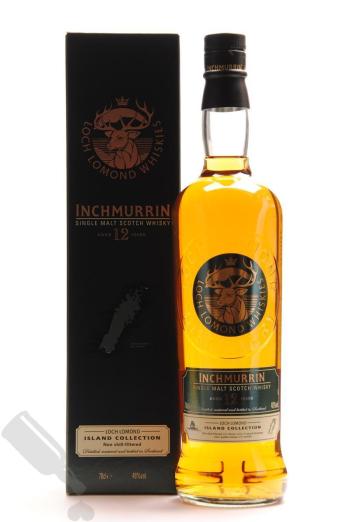 On the nose it’s ridiculously fruity and there’s a whiff of peat if I’m not mistaken (apparently they make Inchmurrin with varying levels of peat). Fresh menthol and some oak. Quite a lot of barley scent. Apple, grape and pear peels.

The palate is smooth regarding flavor, but the 46% (as a slightly elevated ABV) is noticeable. White pepper and some dry oak, with fruit and some ash. A light smoke with crisp fruit. Lemon, cactus maybe? Apple.

The finish offers a smooth ending to this whisky. More oak and barley. Again crisp and fruity, with an ashy edge.

For a ‘standard distillery bottling’, as in the entry level, it’s ridiculously good. Thoroughly enjoyable and one that I could drink again and again (which I did). Summery and fresh, and much better than I expected.

Standard distillery bottlings being ridiculously good nowadays seems to be a theme by the way. Think about Lagavulin, Caol Ila, Bruichladdich, Bunnahabhain, Springbank Talisker, Clynelish, this one, Speyburn, Balblair, and probably many others.

The nose of this one is a lot sharper, but that comes as no surprise. It still is quite light, though. Almost Lowlands like in style. A whiff of artificial fruit flavors, like in candy, with a gentle sweetness of powdered sugar. Dried pineapple, wine gums, pear. Quite nice! Some malt in the background.

The palate is dry and sharp, with the alcohol being very noticeable. Dry barley, oak, a whiff of smoke again and that dried pineapple. The wine gums are back too, but it’s slightly less sweet than I expected.

The finish has some more oak and malt, and is rather dry. Less fruity and more ‘generic’ if that’s a thing.

Then we get to the about-to-be-released Whisky Nerds bottlings. There’s quite some awesomeness going on here so bear with me.

It’s a triptych for starters. Two of the bottlings are coming out any day now. Those are a sherry cask matured whisky and a bourbon cask matured one. The third one will follow in autumn and is the same whisky, but married together.

So, not all of the whisky from both the bourbon and sherry cask have been bottled yet, but have been put together in one cask for marrying (or blending, if you will).

Also, the two whiskies that we’ll be reviewing here are called “Law” and “Order”.

The nose instantly brings lemon drops and a whiff of light smoke. There’s crisp apple and pineapple. Lots of yellow fruits. A very light grainyness and (this is a first) a scent of Fanta. With fizz.

The palate is a tad sharp and light. Slightly dry peat with grass and fruit. Pineapple and lemon. Still a tad spirity (which is a very good thing) and not a lot of oak. Slightly sweet with powdered sugar.

The finish is slightly more comparable to the above two. A fruit bomb that’s sweet and dry. Again the pineapple, lemon and apple. Rather long.

Well, I knew to expect a fruity whisky, since that’s what Bram and Floris always aim for. They succeeded, massively. Surprisingly I got a whiff of peat, but there shouldn’t be any. Of course, that can be caused by me being bad at this, or maybe the distilling apparatus are not 100% clean before the next batch goes in. Who knows. It just adds to the experience. if you ask me.

The sherry cask is promising to be quite an intense one. I didn’t expect the color to be this dark, but if that means anything, we’re in for a treat!

The nose brings big, rich and intense sherry notes from the get-go. No smoke here, but lots of dried fruits with mostly plums. Lots of oak based scents and very dry. Apricot, raisins and tea.

The palate continues this sherried rampage, with hints of slightly bitter almond and cherry stones. Apricot, lots of oak and splinters. The dried fruits make an appearance here too.

The finish is gorgeous and gorgeously rich. Lots of apricots and plums again, with a hint of mint.

Again, knowing the guys who chose the casks, I’m not overly surprised by how this whisky tastes, except, as with the previous one, it tastes a lot better than I expected it to. Another scrumptious whisky that does everything a good sherry cask should do, with a great fruity backdrop and lovely bitter hints.

Both of the first two reviews are bottlings that I’ve finished by now. Both of the latter have not been released yet, but will most definitely end up on my shelf. They are bloody awesome!

Of course, as with all previous Whisky Nerds bottlings, they will be available in selected Dutch whisky specialists.

I'm very interested in booze, with a focus on whisky. I like to listen to loads of music and play lots of Magic: the Gathering, and board games too. I'm married to Anneke, have two daughters Ot and Cato, a son Moos and a cat called Kikker (which means Frog, in Dutch). I live in Krommenie, The Netherlands.
View all posts by Sjoerd de Haan-Kramer →
This entry was posted in Inchmurrin, Loch Lomond and tagged 1993, 2003, Bourbon Cask, Highlands, Inchmurrin, Loch Lomond, Sherry Cask, Signatory, Single Cask, WhiskyNerds. Bookmark the permalink.

3 Responses to A flock of Inchmurrin